Despite missing some key players due to injury, the Blues put in another convincing performance this week, breezing to a 55-29 victory late on Wednesday night. This was great experience for players from the Emus squad who were recruited to cover the injuries, and it’s always nice to get another win under the belt.

What. A. Match.
The Roos headed into this match as significant underdogs, considering the ‘light-blue-wash’ that occurred last time they met the Jays, back in October. However, after the first quarter the score was just 12-11 to the Jays, which shows just how far the Roos have come since the start of the season. By the third quarter energy levels were running low, so the team was reshuffled with the aim to benefit from some fresh legs, unfortunately this seemed to upset the flow a little and the scoreline slipped away to 39-22. Although the deficit was too much to make up in the end, the Roos regained their composure for the last quarter, demonstrating their mental grit as well as high levels of fitness, to end the match 48-30 to Cambridge. Molly Atkinson was awarded Player of the Match. Credit must be paid where it is due; the Tabs played very well and this made for a fantastic game of high quality netball. However, it has proved that the Roos-Jays Varsity Match is no longer the foregone conclusion it looked like it might be in October; with a little more work it could well be that the Roos are a SHOE-in for victory.

A huge thank you goes to all our supporters who made it down to Iffley Road to watch – it was great to see and hear so many of you. 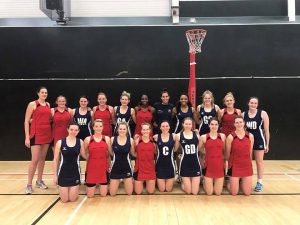 This fixture on Saturday 28th January for the Blues and Roos provided extra match-play in preparation for the Varsity match and both teams gained a lot from the experience. Instead of the usual 4X15minutes, the matches were played as 6X12 minutes – an especially tough workout for the Blues who only had 7 players! Success for both teams was made all the sweeter by the fabulous match tea provided by the Army. Many thanks for 2 great matches.